Which is the different between monocrystalline and polycrystalline photovoltaic cells?

Photovoltaics is a known method for generating electric power through the use of solar cells – converting energy from the sun into a direct current of electricity. Usually, when talking about Photovoltaic cells, the technical terms monocrystalline and polycrystalline appear. These are the two major types of crystalline silicon cells.

There is a great deal of interest between monocrystalline and polycrystalline solar panels. The most common questions that customers have when choosing between the two revolve around the quality and cost spectrum of each type of cell. Knowing their differences and how each type affects a cell’s performance will help consumers identify which type of cell is most appropriate for their use. 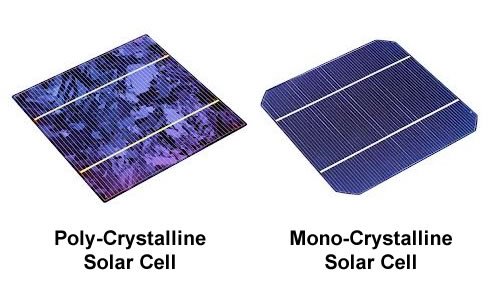 A large number of photovoltaic cells are made from silicon. The reason why silicon is used is due to the fact that it is an incredible semiconductor. This means that generating power through the use of silicon is faster as electrons can very easily travel through it.
However, even though silicon is the second most abundant element in the Earth’s crust, pure silicon has to be extracted before it can be used. The usual method for extraction is called carbothermic reduction, a process in which silica is heated in the presence of carbon. As the extracted silicon cools, it forms crystals. The size of the crystals and the degree of the difficulty of extraction spells the basic difference between monocrystalline and polycrystalline cells. With enough caution, silicon can be extracted as a single large crystal, making a monocrystalline cell possible. Alternatively, polycrystalline cells can be produced from a piece of silicon made up of many crystals. 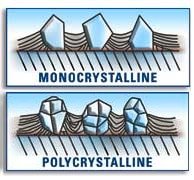 Right now, monocrystalline and polycrystalline panels are becoming more and more similar in terms of aesthetics and performance. In a nutshell, both are good technologies and choosing between the two is simply a matter of personal preference and budget.

However, if you do not have enough space and you do not need to consider the price factor, it is better to choose a monocrystalline cell. You can save 10% of the space for the same amount of energy.

To sum things up, there are key differences to think about when deciding on the benefits of monocrystalline and polycrystalline panels. Consumers should be rigorously informed of all of the options in order for them to make a choice best suited to their needs. With China Sunmaster, you can have that choice.

If you need more information please, don’t hesitate to contact us. Our staff will be glad to help you in any your requirements.

By subscribing the FREE Sunmaster newsletter, you won't miss a single news from the world of Solar Street Lighting!

How to Maintain an Off-Grid Solar System

Gel Battery vs. Lithium-ion: A Comparison of energy storage